The Sarcastic Woman’s Guide to Online Dating: Your Profile Picture

In my last post of the Sarcastic Woman dating series, I touched upon the importance of a thoughtfully-written and highly-fibrous online dating profile that won’t cause your suitors to have spontaneous miscarriages of their spleens.  Today, I dwell even further into the sensitive topic of your online profile picture.

A picture may speak a thousand words, but you don’t want to subject your suitors to an incurable bout of verbal diarrhea.  A well-chosen profile picture set among a tasteful and familiar background will convey the kind of person you think you are when you’re drunk.  But if you’re confused about how to put your best face forward, here are some tips for making your profile picture as memorable as a colonoscopy:

1.  Choose a Backdrop that Everyone’s Familiar With

In the above picture, Ekoli demonstrates a common theme found in online profile pictures – the nondescript nylon rug that covers decades worth of grease stains and rat feces. 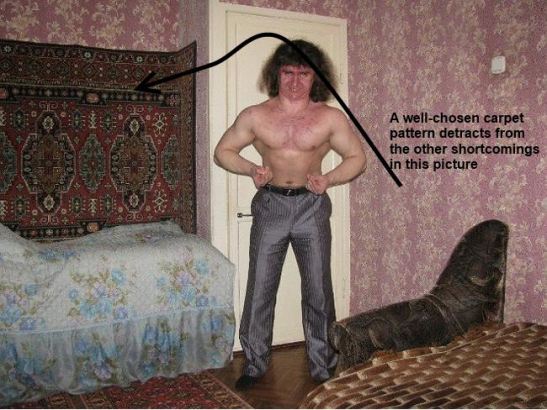 Building on the carpet theme, we can see it echoed in other online profile pictures: 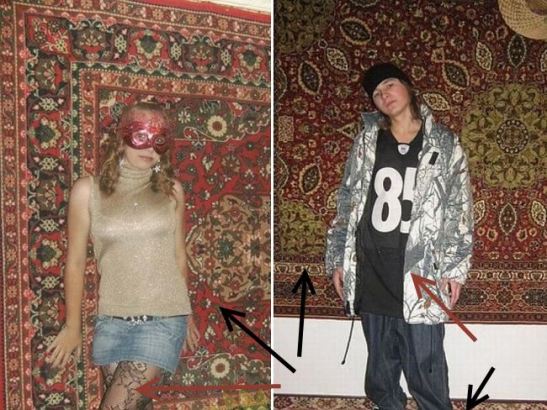 Of course, the pitfall of posing in front of a busy pattern is getting lost in the picture.  That’s why wearing something like a blood-red murderer’s mask, floral lace stockings or a fat suit that makes you look like a homeless Martian will help you stand out from the crowd.  Who do you think achieves this better in the above picture?

2.  The Way to a Guy’s Heart is Through his Stomach

In his epic study, “Wama-Llama’s Ding Dong”,  renowned Russian psychotherapist and ten-time hot-dog-eating champion, Dr. Igor Ivgotanitch, claimed that llamas from South America, like North American men, become aroused at the sight of all foods, certain yard implements, and American football.  After studying 1,000 men, 1,000 llamas, and 10,000 women (12.3111111 women out of 10 fell asleep while watching Sunday Football, thereby necessitating a larger sample of women for the study), Dr. Ivgotanitch concluded that,

Sadly, Dr. Ivgotanitch was institutionalized and stripped of his credentials in 2007 for (a) posing as an unqualified gynecologist; and, (b) faking his accent which was more Conan the Barbarian than it was Russian.  It was later revealed that Dr. Ivgotanitch was really Antoine LaFontaine from Brooklyn, NY, who often went by his street name of Sparky.

Keeping Dr. Ivgotanitch’s findings in mind, we can better appreciate the raw animal sexuality depicted in the following pictures: 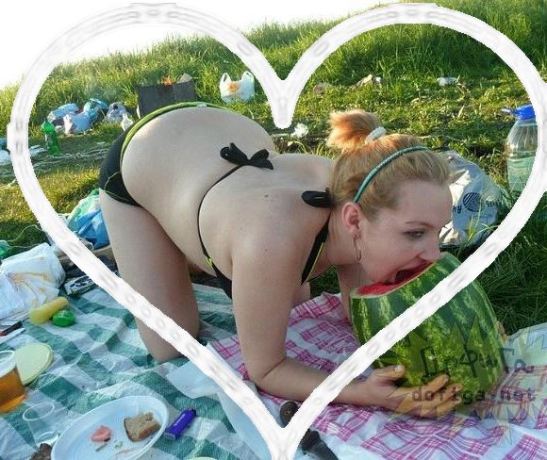 Beer, bread, a  bunch of crap, a watermelon and a babe in a bikini. This woman won’t be single for long.

These fruits on the table could be easily substituted with…

For those who are dating from afar, such as China or Russia, having a picture with a reference to the pop culture of your destination country will help you better relate to people from that country.  Take, for example,

A new China – with two sets of yellow highway markers to counteract the terrible traffic – all displayed against the backdrop of the Arizonan desert.

Of course, the more observant among you will notice that this scene was inspired by…

In order to appeal to a wider audience, we would suggest adding the following to the online profile picture:

Where’s Donkey when you need him?

30 comments on “The Sarcastic Woman’s Guide to Online Dating: Your Profile Picture”