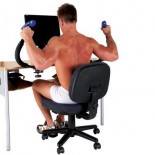 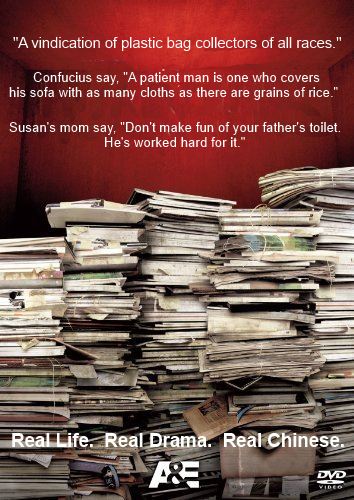 You know your elderly Chinese parents have redefined “home remodeling” when they spend the money they have scrimped and saved over the years on a home remodel that features a humungous desk with a see-through partition that comes up past my nose.  The desk is piled high with old newspapers, empty cookie tins and used shopping bags.  The desk has been recycled from my dad’s old desk, resurfaced with a grey veneer, then covered with pictures from a 2008 Windmills of the World calendar. The abomination announces itself with a big fart as soon as you open the front door of their condo, and in order to get to any other parts of their place you must walk past this piece of furniture.  To help the desk blend in with the rest of the living room, my mother has thumbtacked a 2013 Meadows on My Mind calendar to the wall, along with randomly-placed cut-out Chinese characters which say Success and Wealth.

To make space for the elephantine desk, my parents have jammed their six-foot sofa, the over-stuffed loveseat, and the broken La-Z-Boy – all covered with a patchwork of various towels and bedsheets – up against the tiny space between the wall and the desk, so that the furniture is huddled together, as if planning an escape to the junkyard.  Next to the chairs is my 2003 X’mas present to them – a broken treadmill.  The treadmill wasn’t broken when I’d first given it to them, but after years of doubling as a laundry rack, hat and umbrella holder, the self-respecting treadmill finally took the stairway to treadmill heaven and has been stuck on the highest incline setting for the last three years.  The only things on the treadmill now are half a dozen pairs of my dad’s old shoes and my pet Cockatiel’s cage which sits at a 45-degree angle.

As I watch my Cockatiel make her daily climb towards the food dish, her head bumping into the rope toy, the millet spray, a little bell, a set of keys that doesn’t open anything, and a large mirror – all of which hang like frozen carcasses in a meat locker – I wonder what the bird thinks when, after dreaming about flying free in the Australian outback with her Cockatiel buddies, she wakes up to the cold reality of my dad’s misshapen loafers and her own sorry self looking back at her in the mirror.  It’s one thing to flee your native country and become a refugee for fear of war or religious persecution.  It’s an entirely different thing to live like a refugee, because you somehow think it’s normal. 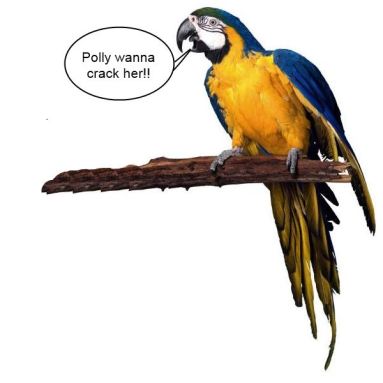 My parents’ house remodel seemed more like a house regurgitation.

The large desk, as it was explained to me, was part of my dad’s office and his work, which, as far as I can tell since his retirement, is trying to stay awake at the computer long enough to filter the massive amounts of useless emails from his friends.  The emails fall into several distinct categories – health, God, and cute animal pictures. Once in a while he’ll fall asleep waiting for a Powerpoint presentation on newborn pandas to download, only to awaken to a rebooted computer and some malware from God that keeps giving dad internet popup screens for discounted Chinese Bible stories.  Other times, I’ll receive forwarded email (chain letters) about diseases nobody’s ever heard of (cancer of the elbow) and cutting edge ways to cure them (drink your own urine).  And now, with a desk the size of three sumo wrestlers, my dad will have a professional platform on which to disseminate this important information to the masses, whether they want to be enlightened or not.

Hoarding, as defined by MayoClinic.com, is the excessive collection of items, along with the inability to discard them.  As I repeat this definition to my mom, she tells me to relax on her child-sized dining chair, which was a 1968 wedding gift from her aunt.  Even at a little over five-feet tall I dwarf the chair, like an overgrown child having make-believe tea with her stuffed animals or her Chinese parents.  While I can understand the concept of portion control while eating, I’m sure I’d enjoy meals at my parents a lot more, if my ass didn’t seep over the edges of the dining chair even before I take the first bite.

Although a comprehensive study of Chinese hoarder parents has never been conducted, I have compiled a list of commonly observed traits:

1.  The need to cover everything of value with plastic, pieces of cloth, rags and towels, aluminum foil, doilies:

a/  Remote controls – with plastic wrap

b/  Sofas – with plastic wrap, towels, doilies, outgrown pieces of clothing (including cloth diapers), and dishrags

*It’s recommended that the original plastic that covers the faceplate of the stove is removed prior to use, otherwise the plastic will cause all the numbers to burn off  during a grease fire, and you won’t know what temperature setting you’re cooking at and which dial is for what burner.  (Source: The Chang Household Grease Fires of 1994, 1998 and 2005 – February through May.)

a/ That picture-in-picture option means nothing if they’re stuck on the Home Shopping Network, I Love Buddha, and the Chinese Medicine channels.

b/ The point of having a surround sound stereo system is to allow the multitude of speakers to to emit as much sound around you as possible.  Covering the speakers with doilies and pieces of cloth, then jamming them into the least conspicuous corner of the room run counter to this purpose.

c/ Fill in the blank:

While most people view a remodel as an opportunity to increase the value of their home, or to improve the efficiency with which everyday tasks are performed, my parents used their home overhaul to remind themselves of the value of each item they have hoarded throughout the years – that plastic fork from McDonald’s that’s missing two tines, a spool of never-used hot pink colored thread to patch my 72-year old Chinese mother’s future Hurley boardshorts, for when she decides to overcome her massive fear of the water by taking up boogie boarding.  Empty and partially rusting Royal Dansk cookie tins, which contain rusty safety pins and coins so old you can’t tell if they’re coins or fillings that have fallen out of someone’s teeth.

In the early 90s my dad paid as much money as some people do for weddings and purchased a Japanese-made electric “horse”, which made you look like the ass you probably are, if you had spent a substantial portion of your life savings for the privilege of sitting on a gyrating mechanical contraption with stirrups.  The idea of the “horse” was to lower your blood pressure and increase your blood circulation in a low-impact, low-intelligence way by gyrating at different speeds, so that you’d have to flex all the muscles in your body to stay firmly on the horse.   I remembered visiting my parents at that time and trying to eat all of the sugar-covered Royal Dansk butter cookies straight from the tin while sitting on the “horse”, which was difficult to do when the machine was at its highest setting.  And I only mention this horse now, because that machine – now broken and covered with a pink floral towel – had replaced one of the dining chairs. 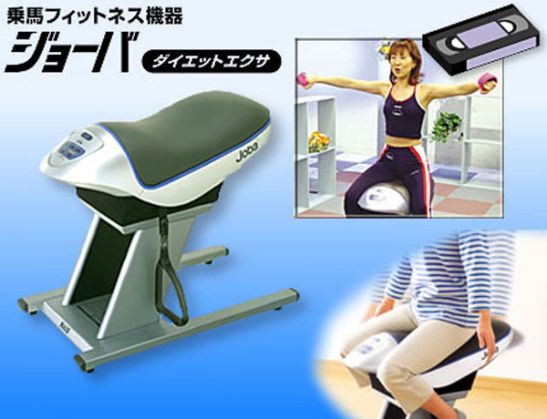 Towards the end of our meal, my parents repeatedly urged me to go see the master bathroom.  This disturbed me greatly, since the last time my parents had encouraged me to do anything I ended up spending an afternoon on a blind date with a man whose greatest passion was to wear Hawaiian shirts and barbeque using different sauces.  Stashing a middle-aged man in the master bathroom of their condo as a homecoming present wasn’t something I’d put past my parents, but it’d been a while since I lived in Taiwan and I was no longer familiar with the universal healthcare benefits there.  Would the adult offspring of Taiwanese citizens also be eligible for intensive family therapy?  Because, as I cautiously approached my parents’ master bathroom, I wondered which was worse – having your Chinese parents hide a desperate Chinese man in their master bath, or half-expecting that your parents to do so.

“Now walk slowly and be quiet”, my mom whispered as I approached the door of the master bath.  “No sudden movements!”

“Why are we whispering?” 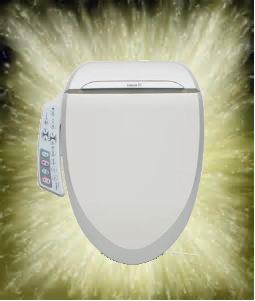 And then I saw it.  As it sensed my approach, it welcomed me with a series of glowing blue lights, a little chiming tune, and a barely audible flush.  The plastic seat cover then repositioned itself and the automatic toilet played one final happy tune, as if to say, I did a good job, I’m a good toilet, I go on break now!

My dad reasoned that, since he had worked hard all his life and now spends quite a bit of his time on the toilet (most of it spent falling asleep and not being  particularly productive) he deserves this Cadillac of Toilets – a top of the line, cream of the crop automatic flush toilet which features an alarm, heated seats, sensor lights that turn on in happy anticipation of being used, plastic seat covers, three different types of flushes, and an array of happy toilet tunes to choose from.

“Susan, you set a new tune on the toilet for me now, I’ve been listening to the old one for months.”

“A new tune?  Like what, When the Saints Go Marching In?”

The rest of my visit with the parents was spent watching my dad fawn over his new acquisition (Oh now that’s a good flush, wasn’t it?) and having intimate conversations with his new best friend (Now, where did that razor go?  I had it right here a minute ago.  Did you see the razor?).  Dad was very protective of his toilet.  I was not allowed to take pictures of the toilet, because the light from my camera would interfere with the toilet’s sensitive sensors.  The toilet also seemed to know who was its “daddy”.  Whenever mom or I approached the toilet, it would start flushing angrily, warning us to stay away.  The other day, I got an email from dad —

How a re you..- your Mom and I are fine…/ I wrotE to Your Sis t er. annie but , dshe dint’ reply.  the toilet is OK , but yester da it did’tn sound good so yoUr Uncle Pe t er check it so it’s okay now — he SAid Ish ould buy Special Celaner fir ut , please check i  f cosco has that…///

Hells Bell’s Palsy – the Symptoms of a Chinese Mother

Lies My Superstitious Chinese Mother Told Me and the Longevity Panty

The Power of Poo and Other Cross-cultural Conundrums