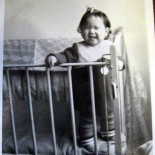 Hells Bell’s Palsy: The Symptoms of a Chinese Mother

Let’s just say this is Annie before Bell’s Palsy.

Bell’s palsy “is a form of facial paralysis resulting from a dysfunction of the …facial nerve… causing an inability to control facial muscles on the affected side…It is thought that an inflammatory condition leads to swelling of the facial nerve…Often the eye in the affected side cannot be closed. The eye must be protected from drying up…in some cases denture wearers experience some discomfort”.  (Source: Wikipedia)

In the Chinese culture, Bell’s Palsy may also manifest itself in the offspring of over-protective mothers, whose paranoid attempts at shielding their children from harm may have the opposite effect of creating a Chinese hell on earth for their kids, complete with the child’s crippling fear of touching a doorknob with bare hands, in case she contracts the Bubonic plague, or her knee-jerk desire to thank Buddha every time she isn’t struck by a wayward steel beam plummeting to the ground while walking underneath a highrise that’s under construction.   (Source: Susan’s sister, Annie)

In 2012, during our mother’s two-week stay with Annie, medical history was made when Annie awoke one morning to find that the muscles on the left half of her face had left town, having decided it needed a vacation from our mother, while the rest of her body stayed behind out of Chinese-mother-induced guilt.  The “inflammatory condition” which led to the “swelling of the facial nerve” on Annie’s face had a pulse and a name – Mother Chang. 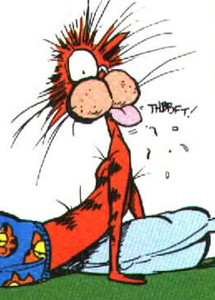 Now, you Italians, East Indians and Jews may think you have the market cornered on the stereotypically overbearing mother, but there is nothing stereotypical about a Chinese mother.   We Chinese model our mothers after our home-made rice wine – 140-proof and hazardous to your health, with the strong possibility of blindness, loss of speech and basic motor skills.  And here’s why —

Having lived in China for 7 years, I’ve had my share of deer penises, fried silkworm pupae and being ambushed at the ATM or harassed on the street, but none was more traumatic than being locked in a bathroom stall with my mother for 20 minutes when I was 8 years old.  It was traumatic on many levels:

1.  My mother had dressed me – in several layers of scratchy thermal underwear, then a bright yellow sweatshirt, then a cheap suede fringed vest, a matching fringed skirt, topped with a large cowboy hat I couldn’t see out of, a leather satchel decorated with pink flowers and too-big clogs with kitten heels.

2.  My mother had insisted I go to the bathroom, even though I didn’t want to go, but I really needed to go.  We fought over this for about 5 minutes, took another 10 minutes to find the bathroom, then were locked inside the bathroom together for another 20 minutes, most of which was spent listening to my mother plead for help, saying she didn’t want to die with her young fashion victim of a child inside a public bathroom, where the only water source was from a broken toilet.

3.  The 4′ x 4′ dingy bathroom was in the basement of a turn-of-the-century retail building, back when the years started with a “18-“.  We were visiting my Aunt Gloria who owned a store selling macrame plant holders, beaded door dividers, funky incense, and leather satchels and belts decorated with big flowers and vines.  Her store was located in what we now call a daylight basement part of the building, while the bathroom was located in the dungeon.  Today, the entire basement of the building would be what paranormal experts would call a hotbed of supernatural activity.

4.  My mother tried to think outside of the box that was the toilet stall.  As there was no access underneath the bathroom door, she believed the only way out was up and over the walls of the stall.

When attempting to climb onto a toilet and its water tank, kitten-heeled clogs are not the shoes of choice and overdressed eight-year-olds are not the prime candidates.  The noise generated from my falling, shattering the water tank, nearly flushing myself and my clogs down the toilet, and my subsequent wailing finally led someone to rescue us.  Someone, who slowly and carefully explained to my Chinese mother that the bathroom door was just a little sticky, and all it needed was a good push to open.

Mother Martyr May I?

Have this nutritious chicken broth I stayed up all night making for you.  It’s good for your chi…no, no…I’m OK.  I’ll just have this rice gruel and this leftover chicken from 3 weeks ago…at least…I think it’s chicken.  Hard to tell with all the hairs and green on it.  (This is followed by a dry heaving cough commonly emitted by people with terminal pulmonary tuberculosis.)

After I wash your father’s clothes and his car, pick up the mail at the post office, pay the phone bill and marinade the meat for dinner, I’ll have some time to mop the floors and hem your pants.  No, it’s OK, I can get to it today.  Rest is only good for people who are dead.”

When I die, I want you to remember how much your mother loved you by:

– calling you everyday, sometimes three times a day in succession, because I couldn’t remember what I was really calling about the first two times

– cleaning your desk without asking, so that you can’t find your checkbook, house keys and cell phone

– stocking your fridge and pantry with things you don’t know how to cook and will never use: dried fungus and red dates, dried longan, tapioca balls, preserved asparagus root, barley…

– insisting on cooking all your meals then complaining you don’t have the right stove, pots and pans, soy sauce…

– not blogging about you

In Taiwan on weekday evenings from 7pm till midnight, my mother would watch a succession of noisy Asian soap operas, which all have the common themes of crying, fainting and yelling.  The families are not normal: everyone is beautiful and someone is always suffering from a catastrophic illness or amnesia/suicidal/trying to win back a lost love/running from mobsters or himself.

There’s usually also the character of a busybody middle-aged lady – a comic foil – who  dresses garishly, with horn-rimmed glasses hung around her neck, or a large purse that she clutches close to her body.  This character gossips, dispenses unwanted advice and gets into everyone’s business.  Her own children treat her with a kind of comic exasperation and stay away from her, while her husband either cajoles her or becomes catatonic from her over-nagging.  When I told my mother that she reminded me of these motherly characters on the show, she glared at me and said that she wished she were one of these mothers on the show, because then her kids would be like the ones on the shows – highly-respected doctors giving prostate exams to the poor in Ghana and calling their mother every week and doing exactly what their mother had told them to do.

Do You Have A Chinese Mother?

To help you determine whether you have a Professional Chinese Mother, feel free to take this short quiz:

a)  Donald Trump.
b)  gas.
c)  some bad Chinese food I ate for lunch.
d)  my Chinese mother who is looking for me, because I left the house without my jacket, even though it’s over 30C outside .

a)  froth at the mouth, fall to the ground and assume a fetal position.
b)  continue eating as if everything’s OK and hope the food poisoning will last for only 24 and not 36 hours.
c)  create a diversion, such as snatching your father’s toupee from his head and throwing it into the fish tank.
d)  unload your portion onto your sister’s plate when she’s not looking and sanitizing all of her utensils and seating area with Lysol wet wipes.

a)  smelling the dish, then asking your father to taste it.
b)  accusing your sister’s wet wipes of causing epileptic seizures.
c)  accusing you of not eating the bird’s nest soup she made yesterday, which could have prevented such seizures.
d)  nudging your inert body with her foot and asking whether you need a jacket while laying on the floor.

5.  You bring your boyfriend home to meet the parents for the first time.  Your mother _____.

a)  froths at the mouth, falls to the floor, and assumes a fetal position.
b)  continues eating, as if everything’s OK and hopes that your relationship will last for only 24 and not the 36 days it usually does.
c)  creates a diversion, such as snatching your father’s toupee from his head and throwing it into the fish tank.
d)  starts sanitizing your exposed skin, your boyfriend and your seating area with Lysol wet wipes.

Mom and I…before the fringe.  (I also pioneered the high-waisted look, courtesy of my mother.)

Lies My Superstitious Chinese Mother Told Me & the Longevity Panty

28 comments on “Hells Bell’s Palsy: The Symptoms of a Chinese Mother”