Lies My Superstitious Chinese Mother Told Me & the Longevity Panty

I’m the first-born byproduct of old-world Chinese parents.  My Father is nearly twice my age and my Mother is  irrational, but has very nice skin.

My Mother, like many Chinese women her generation, fears death the way that some people would fear stepping into a pile of dog shit while frantically running after their rabid, alpha dog in a dog park.  To my Mother, death, like dog shit in a dog park, is everywhere.

From the ages of zero to pre-teens, I was always overdressed, overfed, overnagged and overwhelmed by my Mother’s fear of death.  Chinese people see a fat kid as a sign of health, so my Mother fashioned me after a 20-lb sack of Jasmine rice. 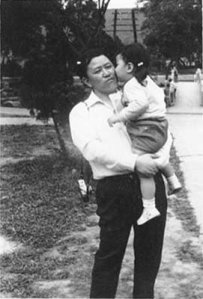 I'm the sack of rice my Dad is carrying.

Not fully satisfied in dramatically increasing my risk for heart disease and diabetes, my Mother also dressed me in as many layers of clothes a human child could possibly wear without dying from a heat stroke.

I was smiling, because of the delirium that sets in at such high temperatures.

Many parents also feed little white lies to their children to keep them in line.  For example, Johnny might be told that, if he didn’t eat his beans or behave at the dinner table, the Cops would come to get him.

But my Mother’s lies were much more evolved and somehow tied into traditional Chinese beliefs and superstitions.  Lies, such as:

Don’t ingest your ear wax, or else you’ll go mute.

Like the ringing in my ears that comes from having dug at them once too often for ear wax, this bizarre lie resonates with me the most and is one which I’ll take with me to my grave, or till I die – whichever comes first.

For the first 5-6 years of my life, I didn’t even know or care what ear wax was.  When I did figure it out, my classmates had already graduated onto picking their noses.   Who’d think to pick at their ears and eat whatever they’d scrounge up there?  Seriously, the ears are probably the most-ignored part of my head.  The nose was much more easily accessible and provided many more hours of amusement more frequently than both ears and eyes combined.  And ear wax wasn’t nearly as disgusting as snot.  I was shunned by my first-grade community for even suggesting such a thing.

Always wear brand new red undergarments for the Chinese New Year and throughout the year: it will bring you good luck.

My underwear drawer contains a lot of red underwear, which my Mother has mailed me throughout the years.  But like any thrifty Chinese person, I just can’t bring myself to throw out things I’ve never worn before.  And, I’m too mortified to donate the red underwear to the Goodwill.

My Mother contends that, wearing red underwear will not only bring me good luck during the Chinese New Year , but will also help me attract decent, eligible men – men who have a fetish for women in baggy granny panties emblazoned with provocative Chinese words, such as, wealth, luck, prosperity, longevity. 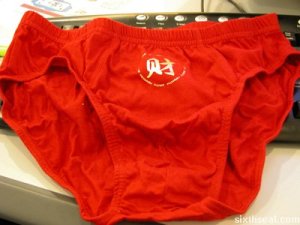 In the Winter of ’97 I had a date and had completely run out of clean underwear, except for my red Chinese New Year granny panties, which I’d never worn before.

Like Goldilocks at the three bears’ house trying out the porridge, I first tried on the red underwear that said Luck, but that underwear was too small and meant for a 12-year old boy with no hips.   So, I tried on the red Wealth panty, which bunched up at the crotch and made me feel like I had a wedgie and a penis at the same time.  From the back, I looked like I was wearing a big red diaper.

Finally, I grabbed the red Longevity panty, which fit just right and acted almost like a girdle, as it went all the way up, past my belly button, held me in tightly, and was made out of some unknown, scrunchy material that smelled like gasoline.  But I was running late, and didn’t have time to think about all that.

When I walked to my car, I noticed this slight rustling, crinkly sound, which was kind of coming from “down there”.  Then I got in the car, put on my seat belt, checked the mirrors, put the key in the ignition, and there was no doubt that the sounds were coming from my red Longevity panty.

As luck would have it – and I didn’t have Luck that night, since that underwear didn’t fit me – I was wearing a daring, short miniskirt with knee-high boots without any tights, so there were no barriers to any noises coming from my crotchal region.

Longevity panty truly lived up to its name, as my date was as excruciating as it was long.

Imagine going out to a quiet, romantic wine bar with the guy of your dreams – intelligent, respectful, humorous, attractive, gainfully employed – only to be sitting in your chair afraid to move and cross-legged the entire night, looking like you had to pee – while your date asks you,

Susan…did you hear something?  What’s that weird noise?  Wait…wait… there it is again!  Is there…is there something wrong with your chair?  Do you want to get up and switch chairs?

It would be far too easy to blame the immense failure of that date (and my entire dating life) on that fateful pair of red Chinese Longevity panties. But I’ve now come to the conclusion that the Chinese superstitions and lies my Mother fattened me up on and clothed me with simply don’t apply to me.

Or maybe in some sick, twisted way they do – maybe Longevity is a curse that refers to the length of time I’ve been unable to find normal, dateable men.  Maybe I’ll find a way to use the Luck panty (like, as a handkerchief?) and let you all know how that goes.

(Editor’s Note: The upcoming Chinese New Year is January 23, 2012.  I will be featuring the underwear that my Mother sends me on a future blog).